July 28, 2014: I’m writing a series of stories looking at abuse in British boarding schools and its wider context – social, historical and psychological. The latest piece, published July 21st in the Observer magazine, looked at the experiences of those who have loved and cared for survivors of abuse, and the immense collateral damage early trauma can do. A lot of it came from those of you, including many wives, sisters and mothers, who have emailed me their stories. There’s 600 or more comments on the article

Here’s the first piece, published May 4 in the Observer. It covers my personal experiences at Ashdown House preparatory school in the 1970s and the current surge of criminal and civil cases concerning similar schools then and more recently. The comments are fascinating; some of over 2,000 communications I’ve had since the article. Many of those are heart-rending; tales of lives warped and soured by early misery. Very few people have defended the system. 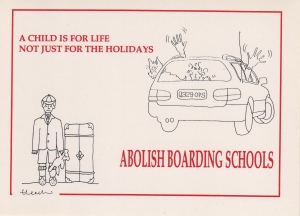 Children as young as six are still sent to boarding school in Britain; there are about 4000 kids under 11 boarding in the private sector, and an unknown number in the state boarding system. Along with the bulk of the child psychiatry profession, I believe sending a pre-teen away from home carries an unacceptably high risk of long-term damage, however kind and caring the institution.

Several campaigns exist to try and stop this bizarre practice. (Children as young as six are still going.) It is often done quite casually, for  notions of status, which can of course still be bought in Britain, or mere convenience.  Boarding School Action tracks the campaigns’ progress on this blog. There is also an important one to change regulation that encourages cronyism and cover-ups in all institutions looking after children – see @MandateNow on Twitter and this BBC story.

In June 2014, the government announced plans to create a crime of emotional abuse or neglect of children – the “Cinderella law”. If the legislation goes through before the election, it will at last bring Britain into line with the rest of the world. It will be interesting to see the scope of it: will it cover just parents, or those in “loco parentis”, like the head.

Therapy appears to have a high success rate with people who have suffered these traumas – more details from Boarding Concern.

If you want to write to me in confidence about your experiences, good or bad, please do so at alex.renton@observer.co.uk. I will respond. It may take a little while – it’s a full in-box.

We can end early boarding

Nov 2014. I’ve joined the advisory board of Boarding School Action, a group campaigning to end early boarding. Also involved is Nick Duffell; the director of BSA is Sally Fraser.

BSA is a not-for-profit organisation and currently pays no salaries. I’m helping raise funds for campaigning, lobbying, media work and for administration. Please donate via the BSA site and sign up for updates. You can donate here by PayPal.

Click this button do donate to support the work of Boarding School Action.

4 thoughts on “Abuse and violence in boarding schools”